With the UK’s largest boiler manufacturers promising that hydrogen-ready domestic boilers will cost no more than the equivalent natural gas boiler, they are certainly worth considering.

Hydrogen is seen by many as the best alternative to natural gas if the UK is to reach net-zero carbon emissions by 2050. Many manufacturers are now labelling their latest boilers and cookers hydrogen-ready.

The Future is Hydrogen

The government’s plan as it stands at the moment is to phase in the use of hydrogen in two stages.

First, in the next few years, a mix of natural gas and 20% hydrogen will be introduced. There are already trials of this going on in some UK communities, to judge the safety and efficiency of the new fuel without disruptive infrastructural changes. A 20% mix can be used with most existing pipes and only slightly modified appliances.

Next, based on the results of the trials, the government wants to introduce a 20% mix into all household gas supplies. This can be relatively easily done with minimum disruption to existing infrastructure. In addition, most modern boilers will be easily adapted to take this 20% mixture.

At some point after this, assuming the trials go well, the government aims to introduce hydrogen as the main household fuel alongside heat pumps and solar panels. So now is a good time to be thinking about getting ready for the switch, particularly if you are already planning to replace your boiler.

The Benefits of Being Hydrogen-Ready

Unlike natural gas, hydrogen does not increase carbon dioxide (CO2) in the atmosphere when it is burned. When burned in oxygen, hydrogen combines with the oxygen to produce water vapour and no carbon (and no soot) is released into the atmosphere. This is important in terms of the government’s net-zero carbon emissions target for 2050. If and when hydrogen completely replaces natural gas as the fuel for our heating, hot water and cooking, it will be a major step in decarbonising our homes.

The most environmentally-friendly and favoured method is ‘green’ hydrogen, which is produced using a process powered by renewable energy such as solar or wind power. The most common form of hydrogen production at the moment is, however, ‘grey’ hydrogen, which is created from natural gas, or methane, using steam methane reformation but without capturing the greenhouse gases made in the process. The challenge for the near future, according to the UK government, is to produce hydrogen on a scale that will allow a cost-effective national conversion to this fuel and at the same time be environmentally safe.

Replacing natural gas with hydrogen will eliminate one major safety concern of natural gas. Because hydrogen (as opposed to fossil fuel or wood) releases no carbon when burnt it does not produce carbon monoxide (CO). You will be aware of the toxic dangers of the invisible, odourless, carbon monoxide and the importance of having CO detectors fitted in our homes.

As with any gas fuel, the risk of escape through a leak of hydrogen is no different. As with natural gas, hydrogen is invisible and odourless and will also be given an additive to give it an odour so that any leakage can be quickly detected and any danger averted.

Hydrogen is also treated, in some of the trials taking place, with additives that produce a bright orange flame. This could change as the industry has not reached a consensus on this. Perhaps we will have to get used to a green flame on our hobs.

We will also have to get used to a squeaky ‘pop’ when we ignite a hydrogen oven or hob. This is not something to worry about, just the effect of hydrogen reacting with oxygen in the air when it burns.

Although hydrogen only produces water vapour when burned with pure oxygen, when it is burned in air (which is mostly nitrogen), a small amount of Nitrogen Oxide (NO) is produced in a thermal reaction. Nitrogen Oxide is noxious in larger quantities but domestic use of hydrogen will keep it well within safety limits.

There is no anticipated need for Nitrogen Oxide detectors in our homes. and although it is a greenhouse gas, it is not expected that domestic home use will produce Nitrogen Oxide in the kind of quantities to cause a problem.

At Plumb-Line we work with the UK’s leading boiler manufacturers and aim to install the latest technology to give you a warm and comfortable home, while providing energy-efficiency and future-proofing as much as possible.

If you’re thinking about replacing your boiler for one that is hydrogen-ready and more efficient, we will be glad to help. Call us at Plumb-Line on 01604 644500. 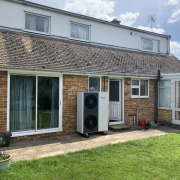 What is an Air Source Heat Pump?
Weather Compensation Controls

This site uses cookies. By continuing to browse the site, you are agreeing to our use of cookies.

We may request cookies to be set on your device. We use cookies to let us know when you visit our websites, how you interact with us, to enrich your user experience, and to customize your relationship with our website.

Click on the different category headings to find out more. You can also change some of your preferences. Note that blocking some types of cookies may impact your experience on our websites and the services we are able to offer.

These cookies are strictly necessary to provide you with services available through our website and to use some of its features.

Because these cookies are strictly necessary to deliver the website, refuseing them will have impact how our site functions. You always can block or delete cookies by changing your browser settings and force blocking all cookies on this website. But this will always prompt you to accept/refuse cookies when revisiting our site.

We fully respect if you want to refuse cookies but to avoid asking you again and again kindly allow us to store a cookie for that. You are free to opt out any time or opt in for other cookies to get a better experience. If you refuse cookies we will remove all set cookies in our domain.

We provide you with a list of stored cookies on your computer in our domain so you can check what we stored. Due to security reasons we are not able to show or modify cookies from other domains. You can check these in your browser security settings.

These cookies collect information that is used either in aggregate form to help us understand how our website is being used or how effective our marketing campaigns are, or to help us customize our website and application for you in order to enhance your experience.

If you do not want that we track your visit to our site you can disable tracking in your browser here:

We also use different external services like Google Webfonts, Google Maps, and external Video providers. Since these providers may collect personal data like your IP address we allow you to block them here. Please be aware that this might heavily reduce the functionality and appearance of our site. Changes will take effect once you reload the page.

The following cookies are also needed - You can choose if you want to allow them: